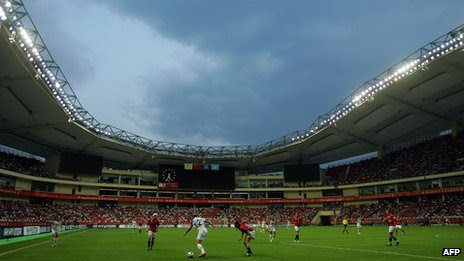 The Hongkou Stadium in Shanghai attracts crowds of less than 10,000 fans on an average match day


Chinese football clubs have been spending money recently - a lot of money.

Former France international Nicolas Anelka has been lured here with a salary reported to be worth around £200,000 a week.

And now, rumour has it, Chelsea hero Didier Drogba is on the verge of following his old team-mate to China for an even bigger sum.

And yet when you look at the finances of China's Super League, as the top division is known, the sums simply do not add up.

Of course, it is not unusual these days for football clubs to lose money.

But in China, the losses are so large that they are leading some pundits to ponder an intriguing theory.

Could all of this financial largesse, they wonder, be part of a plot by China's Communist leaders to get their hands on the World Cup?

Shanghai Shenhua is a long way from the English Premier League in more than just miles. 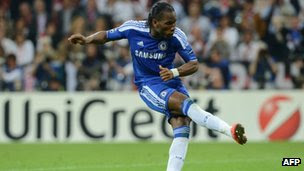 On an average match day, the Hongkou Stadium attracts a crowd of less than 10,000 fans. That leaves a lot of empty seats.

The club's total annual income is just £2m or so, a budget that would not keep Anelka and Drogba's former employer, Chelsea, going for even a week.

But while the club might not be rich, its owner certainly is.

Zhu Jun has made his fortune in the online video game business. Founder of a company that bought the Chinese distribution rights to the World of Warcraft franchise, he is said to have pocketed about £60m when it went public in 2004.

He has grown richer since.

And he is not the only tycoon now using his own wealth - or that of the companies he owns - to bankroll the title-chasing hopes of a Super League club.

He will be taking over a team with an impressive and, needless to say, very expensive array of talent including Argentinian midfielder Dario Conca and Paraguayan striker Lucas Barrios.


Mr Xi Jinping, the future president of the People's Republic of China is a great fan of football. So these businessmen are being very smart.”


Club owner property billionaire Xu Jiayin is said to have bankrolled the club by as much as £45m in the past couple of years.

He has made the point to Chinese media that, if nothing else, the investment buys him valuable exposure for his brand.

But Tony Shao, a sports commentator for China's state-run broadcaster CCTV, said that with China about to anoint a new leader later this year, it is no accident that businessmen are throwing their cash at football.

"Mr Xi Jinping, the future president of the People's Republic of China is a great fan of football," he says. "So these businessmen are being very smart.

"If you make a special connection with high-level officials in government, then you definitely get yourself an advantage in business."

Rowan Simons, is the author of the book Bamboo Goalposts, the story of his long-term efforts to develop grass-roots football in China, and he has no doubt about the money now being lavished on foreign signings.

"These are vanity projects, investments to curry political favour and to show off," he says.

And he agrees that the wealthy club owners will be paying close attention to the political signals coming from the very top.

"Of course the Chinese government has been fairly consistent in its ambition to win the World Cup, and it sees investment in football at club level as being a spur for the game."

But there is a big flaw in the plan, he adds.

"It's certainly true that the likes of Anelka and Drogba turning up will increase interest in the game, but the problems in Chinese football are systemic; very few football pitches and virtually no infrastructure at the grass-roots level." 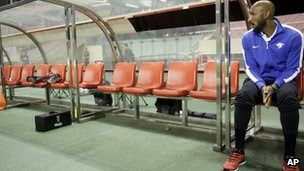 Nicolas Anelka has been reportedly lured to China with a salary of around £200,000 a week

And there is another problem, one now being aired in a very public cleaning out of China's football stables.

So far this year, dozens of senior officials, referees and players have been convicted of match-fixing and some of them given lengthy jail sentences.

Corruption, the cases demonstrate, had become blatant and routine with large sums of money changing hands to throw matches at the highest level of the sport.

No wonder China's fans are sometimes said to be the most cynical in the world.

Given the parlous state of the game, it would seem that there would be little here to attract expensive star signings, other than of course the eye-watering salaries on offer.

Not so, says Mario Bozic, another of Shanghai Shenhua's foreign recruits.

"I think it's not just the money, because these big names that come here are already rich," he says.

Whether China's expensive foreign players really are unwitting pawns in a Communist quest for world footballing domination is hard to say, but they might certainly help to raise standards.

Chinese fans will be hoping so.

Despite their long suffering, they remain resilient, and football remains one of the most popular spectator sports, with millions tuning in to watch the Super League on television.

But win a World Cup?

China's leaders are capable of many things, global economic supremacy even. But football, most fans agree, may be beyond them.

Email ThisBlogThis!Share to TwitterShare to FacebookShare to Pinterest
Labels: Soccer

English schedule from Bob the Canadian

In this English lesson I will explain what I think is the best way to learn English in 2020. As many of you know I am an actual teacher. I...