Why The Web Is Going Dark Over SOPA & PIPA

Major web sites have gone dark to protest the anti-piracy bills in the US Congress known as SOPA and PIPA. Internet companies fear they potentially could “break” the internet by giving out powers to broadly to ban or censor web sites.

Status Of The Bills

SOPA — the Stop Online Piracy Act — is the bill in the House of Representatives. It received much attention and debate in December. It’s planned to be reworked in February, and it seems unlikely to come up for a vote in the way that it was.

PIPA — the Preventing Real Online Threats to Economic Creativity and Theft of Intellectual Property Act — is the bill in the US Senate. It’s also known as PROTECT-IP. It comes up for a vote on January 24, which has sparked today’s actions. A related hearing on the bill happens today.

CNN has a nice rundown of the current status of both bills, and the debate about them, in its SOPA explained: What it is and why it matters article. I also found this New York Timesarticle and this CBS News article very good for background. Jason Harvey at Reddit has an interesting, quick-to-read-and-digest, review of provisions in both bills.

For a rundown on where various representatives stand on the two bills, ProPublica has three good pages, one for SOPA, one for PIPA and one for both combined.

For its part, the Obama administration said earlier this week that it will not support parts of either bill that “reduces freedom of expression, increases cybersecurity risk, or undermines the dynamic, innovative global Internet.”

If no bill is passed, the Digital Millenium Copyright Act – passed in 1998 — would remain the primary way for content owners to combat online piracy. It has takedown provisions used to remove listings from search engines like Google to infringing content. More about the DMCA can be found in the articles below:

An alternative to SOPA & PIPA has also been proposed called OPEN, the Online Protection and Enforcement of Digital Trade Act, which seems to offer more protection to publishers and site operators. The backers are also calling for public contributions to improve the proposed legislation. Google says it supports this alternative approach.

Former US Senator Chris Dodd, who now heads the Motion Picture Association Of America which supports the bills, has called the protests an “irresponsible response” and a “dangerous gimmick.” His full statement

Only days after the White House and chief sponsors of the legislation responded to the major concern expressed by opponents and then called for all parties to work cooperatively together, some technology business interests are resorting to stunts that punish their users or turn them into their corporate pawns, rather than coming to the table to find solutions to a problem that all now seem to agree is very real and damaging.

It is an irresponsible response and a disservice to people who rely on them for information and use their services. It is also an abuse of power given the freedoms these companies enjoy in the marketplace today. It’s a dangerous and troubling development when the platforms that serve as gateways to information intentionally skew the facts to incite their users in order to further their corporate interests.

A so-called “blackout” is yet another gimmick, albeit a dangerous one, designed to punish elected and administration officials who are working diligently to protect American jobs from foreign criminals. It is our hope that the White House and the Congress will call on those who intend to stage this “blackout” to stop the hyperbole and PR stunts and engage in meaningful efforts to combat piracy.

Personally, I find it more troubling that the head of the MPAA thinks it can tell publishers what they can and can’t do with their own web sites. In particular, the “gateway” argument seems aimed at Google, as if Dodd believes Google’s role as a search engine doesn’t allow for it to also have a corporate opinion about proposed laws.

If that’s the case, I fear even more for any law that the MPAA gets behind. Make no mistake — I’d like to see some type of improved system that can indeed help stop sites that infringe copyright. I’ve found myself personally feeling powerless and frustrated with the crazy and time-consuming DMCA requirements that exist now.

Too often, I encounter sites that Google ought to ban from its search engine not because of some legal requirement but because the sites can so clearly and easily be seen to be engaging in wholesale copyright theft.

But if the MPAA finds a Google protest to its users as incompatible with its search engine mission, how else might the MPAA might want to limit Google’s freedom of speech with other regulations in the future?

For some further thoughts on all this, see some of my past articles below:

For its protest, Google is showing a blacked-out logo on its home page and search results pages: 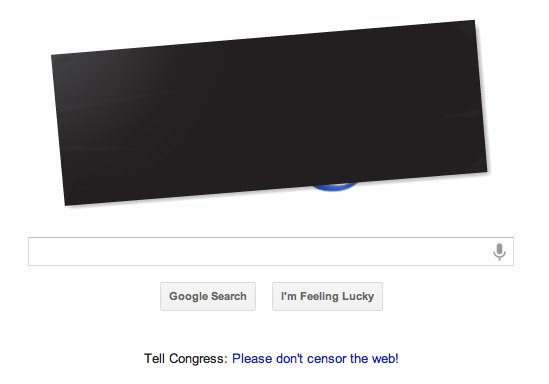 Clicking on the logo leads to an information page where the company makes its case against the two bills and encourages people to sign an online petition against them: 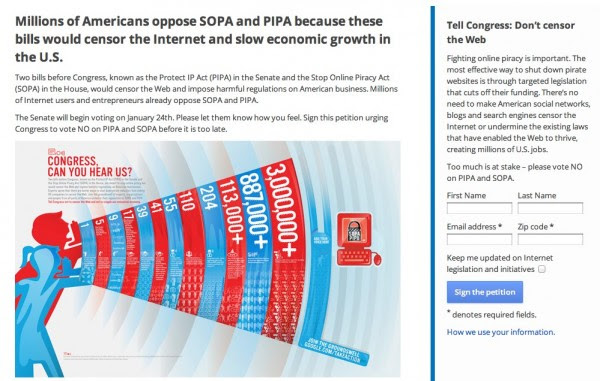 Google also has a blog post up about its opposition here. Interestingly, Google-owned YouTube — a flashpoint of piracy debate for Hollywood — doesn’t appear to have any special protest or logo treatments running.

Wikipedia’s English-language site has effectively closed. Going there instead brings up, after a brief flash of whatever page you wanted to see, a dark screen encouraging people to contact their elected officials to protest the bills:

Entering your ZIP code brings up a page listing contact information for the area’s US Congressional and Senate representatives, along with information on why the bills should be opposed: 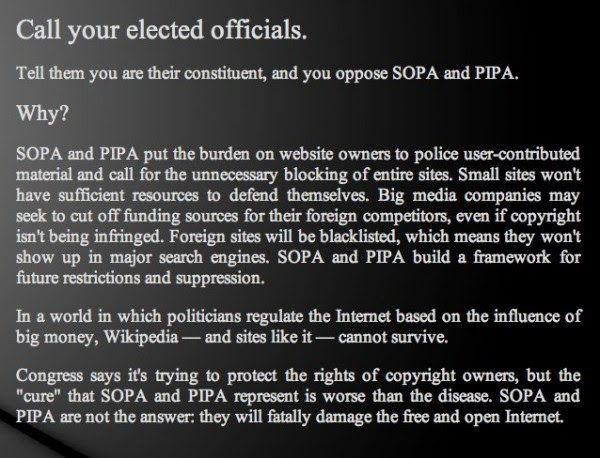 Actually, at least two English-language pages on Wikipedia have not been closed: the ones about SOPA and PIPA. Disabling JavaScript apparently also makes the pages available to those who want them. The mobile site remains open.

Over at Craiglist, the company has taken a middle approach between Google and Wikipedia. There’s a big notice on its home page: 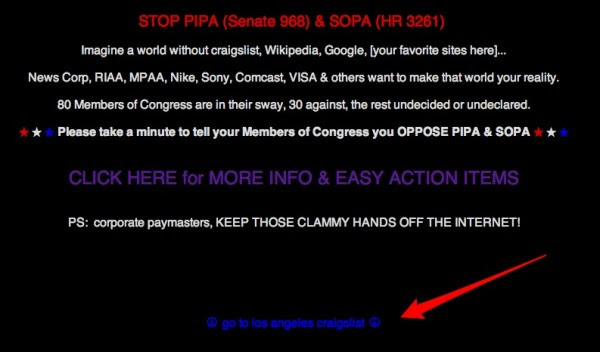 The notice promotes a link to “easy action items,” a page on Craigslist with information on how to voice opposition to the bills.

Below the notice, a small countdown starts when the page loads. After 10 seconds, a link appears allowing access to the Craigslist site you’re after (as the arrow shows above).

Other sites have also taken protest actions, including: 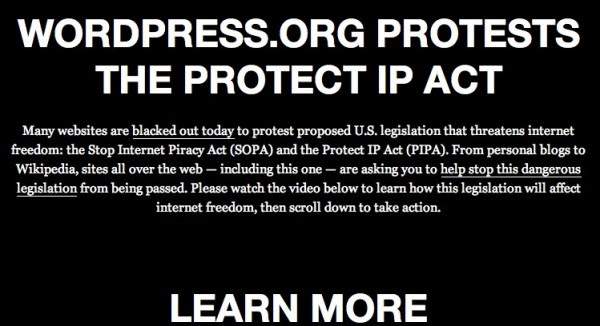 Blog-creation service WordPress has a notice up with an informational video, links to further information, ways to email or call Congress plus how people can black-out their own sites. But the site also remains operational for those who use a “Continue” link at the bottom of the page.

Photo sharing service Flickr is allowing users to voluntarily “darken” their images and display a message about why, if they so choose. More information is provided in this Flickr blog post.

Mozilla, which produces the popular web browser Firefox, said it plans to black-out its page today. OpenDNS will continue resolving web sites, but error pages it delivers will have some text randomly blacked-out to illustrate censorship.

For a further list, see the SOPA Strike site, which lists many sites that have pledged some type of action. Marketing Land executive news editor Matt McGee has begun collecting screenshots at Flickr and Pinterest. Also watch for more sites and related news here and here on Techmeme.

Here on Marketing Land, and on our sister-site Search Engine Land, we’ve changed to a dark background with a “Stop SOPA & PIPA” message at the top of our pages that leads to this article.
By Mobody at January 19, 2012

English schedule from Bob the Canadian

In this English lesson I will explain what I think is the best way to learn English in 2020. As many of you know I am an actual teacher. I...